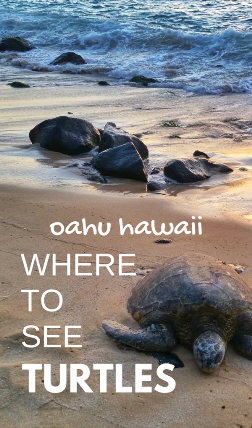 Seeing turtles on Oahu is one of those things that’s on a lot of people’s bucket lists when they visit the island.

And there are a number of locations that are common places to go to spot sea turtles. Still, a lot of it has to do with luck!

And if you’re headed to the Big Island, be sure to check out the Punaluu black sand beach for a chance to see turtles on the Big Island!

Can you see turtles in Waikiki?

If you’re lucky, you’ll spot a turtle swimming when you’re on Waikiki Beach. Aside from one of the best spots for snorkeling in Waikiki, there have been turtle sightings around the Outrigger Reef Hotel and the Sheraton Waikiki.

Check this turtle swimming in Waikiki coming up above water for a view of Diamond Head! 😉 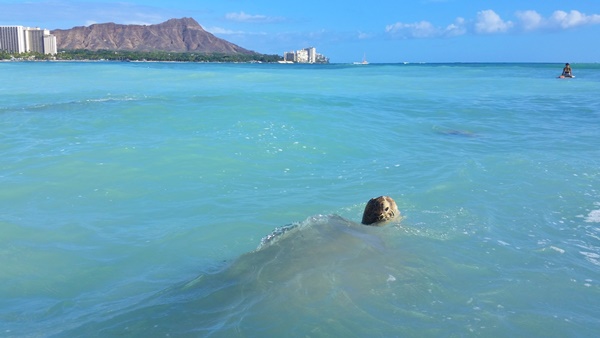 See more: Where to see turtles in Waikiki

On this particular day, there were a bunch of turtles swimming right alongside the pier in front of the Outrigger Reef Hotel.

This is the pier that you can access from Waikiki Beach: 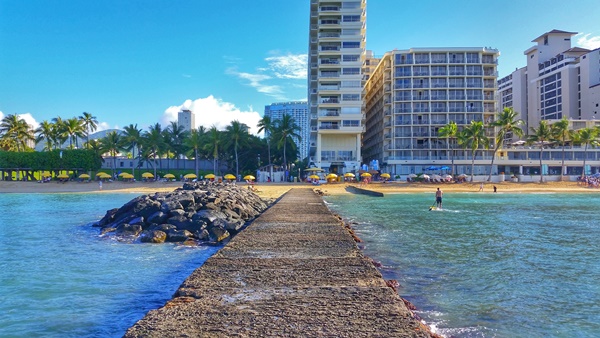 The turtle sightings here may not be reliable enough to go out of your way to come here just for turtles.

But if you’re in the area, or if you’re doing a walk along Waikiki Beach, it could be good to do a walk on the pier and look carefully in the water to see if you can spot some turtles!

The Hilton Hawaiian Village and Sheraton Waikiki are not too far from the Outrigger Reef Hotel.

So if you are swimming at the beach in front of either of these hotels, you may also consider looking towards the pier every once in awhile to see if there’s a commotion.

If you see a gathering of people on the pier staring and pointing at the water, that could be a good indication that they see turtles. Time for you to run over there to join the commotion. 😉

For a visual, see this Waikiki map for the location of the Outrigger Reef Hotel in relation to the Hilton Hawaiian Village, Sheraton Waikiki, or another hotel that you’re staying at in Waikiki.

Side note!
If you'll be snorkeling on your next vacation, consider wearing these types of UV swim shirts. Also see about what to pack for Hawaii for hiking, snorkeling, and more essentials! And for Hawaii vacation ideas, see the best things to do in Oahu that will give you Hawaii vibes!

Can you see turtles on the North Shore?

Now, if you want to help your luck with turtles just a little bit, one of the most conveniently reliable places to see turtles in Oahu is on the North Shore.

It’s convenient because there are a bunch of other excuses you can make for a trip to the North Shore! Like… Waimea Bay and Sharks Cove! 😉

On the North Shore is where you’ll find Lanieakea Beach, which is often referred to as Turtle Beach. Can you guess why? 😉 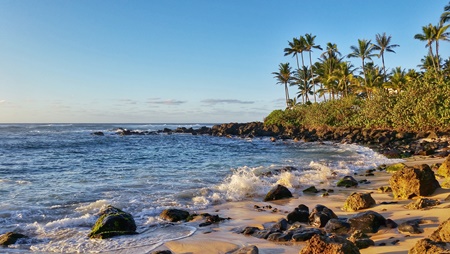 Of course, there’s no guarantee that you’ll see turtles at Turtle Beach. But if you had to pick one spot on Oahu, you might want to consider making it Turtle Beach!

The reason many sea turtles frequent Laniakea Beach of course is because they think that this beach is one of the best beaches on Oahu to catch a little bit of sun. 😉

Well, for people, what makes Laniakea Beach one of the best beaches on Oahu is the presence of the turtles. 😉

Best time to see turtles on the North Shore

So what’s the best time to see turtles on Oahu when you’re on the North Shore? That would seem to be at sunset!

This is based on past reported turtle sightings at Laniakea Beach. If you’re in the area in the morning or afternoon and wanting to see turtles, it would be worth it to stop by then too. Because there are turtles who choose those times to make an appearance at the beach too.

Laniakea Beach is a pretty rocky beach, and there can be hidden rocks under the sand so it would be best not to walk barefoot on the beach. 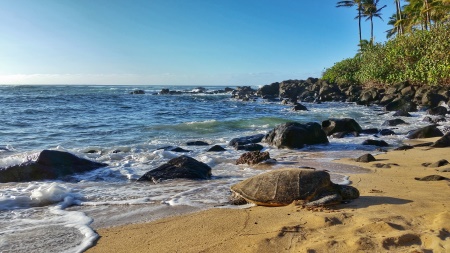 Turtles you can see at Laniakea Beach, with stories as told by the local turtle conservation group

The Malama na Honu group, meaning protect the turtles in the Hawaiian language, is a local turtle conservation nonprofit organization.

You can learn more about the work they do to protect the Hawaiian sea turtles through education, public awareness, and conservation here, as well as read the stories of more sea turtles who call Hawaii their home!

You may even consider adopting a turtle here! You can read each turtle’s individual story and choose which one you want to adopt. Then you can get a turtle certificate similar to this: 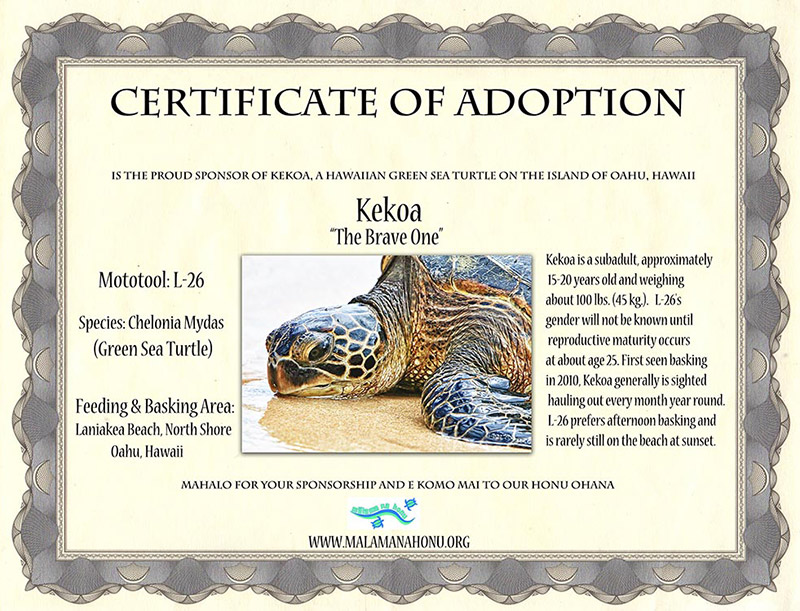 Getting there: Is it worth it to go to Laniakea Beach by bus?

What turtles do you have a good chance to see at Turtle Beach?

Now, these are the stories, as told by Malama na Honu, of some of the turtles you have the best chance of seeing at Laniakea Beach.

Whether this turtle takes a swim out to sea in the morning or afternoon, she can still be seen at Laniakea Beach at sunset 85% of the time.

Olivia Dawn, with the Hawaiian name of Ipo, is around 42 years old and weighs around 210 pounds.

She made the 1,000 mile round trip migration to nest at the French Frigate Shoals, an atoll located in the northwestern part of the Hawaiian islands archipelago. It took her 35 days to get there.

Data collected from the time depth recorder attached to her shell revealed that Olivia Dawn made a noteworthy deep dive of 443 feet.

It was almost 11 years until she returned to nest again. She was the 101st of over 850 turtles recorded as nesting at the French Frigate Shoals in 2015.

This turtle prefers the afternoon hours and is rarely seen on Laniakea Beach in the morning or at sunset.

A small piece of Kekoa’s shell is missing on the back side.

Kekoa first arrived on the beach to bask in early 2010. His initial stays were relatively short in duration as he became acclimated to the presence of humans on the beach. Now, he basks at Laniakea Beach year round.

When this turtle arrives out of the water, it is usually in the afternoon hours and he also likes to remain on Laniakea Beach after sunset.

Punahele is a 37 year old turtle that weighs around 225 pounds.

She has a faint quarter-sized crescent shaped indentation on the second right outside portion of her shell.

She is another one of the Turtle Beach turtles that can be seen basking at the beach year round. Punahele is one of the most frequent turtles to hang out at Laniakea Beach.

When this turtle is on Laniakea Beach, she stays past sunset almost 60% of the time.

Hiwahiwa is around 47 years old and weighs around 230 pounds.

Her shell sustained severe damage in an apparent collision with a watercraft like a boat or a jet ski in 2000.

Hiwahiwa began a 1,000 mile migration to the French Frigate Shoals on April 27, 2010. She had a satellite tracking device and time depth recorder on her shell.

On her first day at sea, she made a record breaking dive of 570 feet.

Her satellite tracker failed on August 5, and though the worst was feared, she returned safely to Laniakea Beach on September 6. The time depth recorder is still attached to her shell.

Over the past year, Hiwahiwa is also among the most frequently seen turtles at Laniakea Beach basking in the sun. She can be seen year round.

How many turtles do you see in the picture? 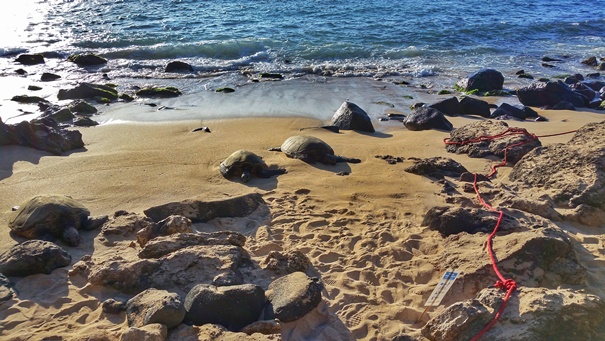 If you see three, you’re pretty good at turtle sightings! 😉

When you get to the beach, you might mistake a turtle for a rock!

There are regularly volunteers at Laniakea Beach who are there to make sure tourists don’t get too close to the turtles. That’s what the red rope is for in the picture above.

You can also ask these volunteers any questions you have about the sea turtles!

There are affiliate links on this page. As an Amazon Associate, I may receive a commission.