Waikiki to Hanauma Bay by bus 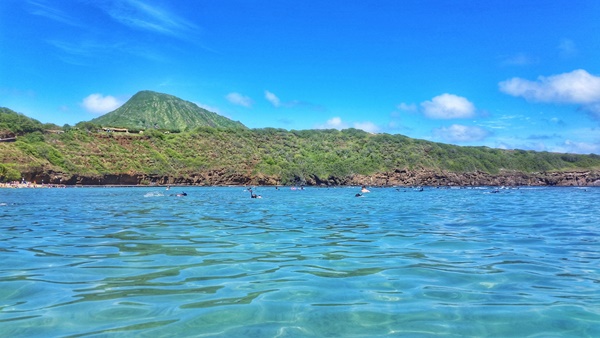 Hanauma Bay is one of the best snorkeling destinations in the world.

And with island-wide public transportation, getting to Hanauma Bay by bus from Waikiki or Honolulu is pretty easy!

First, have a look at tips for taking the bus on Oahu.

Looking for an adventure on Oahu? Here’s how to get to Hanauma Bay by bike!

Now, here’s a bit more about getting to Hanauma Bay by bus.

You can take a single city bus to Hanauma Bay Nature Preserve from Waikiki without any bus transfers. This makes it pretty convenient!

Side note!
If you'll be snorkeling on your next vacation, consider wearing these types of UV swim shirts, and also see some snorkeling essentials for Hawaii. And for Hawaii vacation ideas, see great short hikes on Oahu with ocean views, and great scenic drives to plan on Maui, and great areas to visit as you circle the Big Island, and great coastal hikes on the quiet island of Lanai!

How long does the bus to Hanauma Bay take?

The bus to Hanauma Bay you’ll want to take is on the 22 bus route. The bus ride from Waikiki to Hanauma Bay is around 45 minutes, depending on where in Waikiki you board the bus.

Which bus stop do you get off at?

There are 2 bus stops that have “Hanauma Bay” in their bus stop name. There is one called “Kalanianaole Hwy + Hanauma Bay Rd” and there is another is called “Hanauma Bay Nature Park.”

You will want to get off at the bus stop called Hanauma Bay Nature Park… because that’s your destination! 😉

You’ll want to stay on the bus, and the bus will go further down the road to get you close to the entrance of the park.

It can be a crowded bus ride

Because of the popularity of Hanauma Bay as a snorkeling destination, the 22 bus can be a popular route among tourists.

So if you get on the bus at a later bus stop in Waikiki, it’s possible that you may be standing the whole way to Hanauma Bay, if you’re catching the bus when a lot of other people are headed to Hanauma Bay.

Also consider that on the way back to Waikiki, you may have to wait for the bus to come. And if you are leaving Hanauma Bay when everyone else is leaving in the afternoon, this could also mean a crowded bus ride on the way back too.

Use Google Maps to plan your trip!

Google Maps public transit directions are reliable when it comes to getting around Oahu by bus.

For Hanauma Bay, you’ll want to make sure you list Hanauma Bay Nature Preserve as your destination. (Or departure point if you want to check directions to get back to Waikiki!) If you just type in Hanauma Bay without the Nature Preserve part, the search results may tell you that there are no public transportation options available… and that’s just not true. 😉

When you’re looking at the Google Maps directions, be sure to change the “leave now” to “depart at” some time in the morning. Weekday vs weekend may also make a difference in bus timings available. Changing the departure time will make for better planning and give you a better idea of what your options are!

Things you might want for your Hanauma Bay snorkeling trip

Now, here are some things you just may want to consider adding to your Hawaii packing list so you’re ready for the sun when you’re snorkeling at Hanauma Bay!

More things to do in Oahu

But, if bus is the way you’re getting around Oahu, you might want to save these hikes for another day. Unless you don’t mind hitting the trails with your snorkeling gear! If you decide to do this, just be sure that you have a good daypack to carry your gear on your back, instead of a beach bag on your shoulder.

Or, if you’re renting snorkeling gear at Hanauma Bay, it could make it easier to do these hiking trails!

Hanauma Bay is on the east side of Oahu!